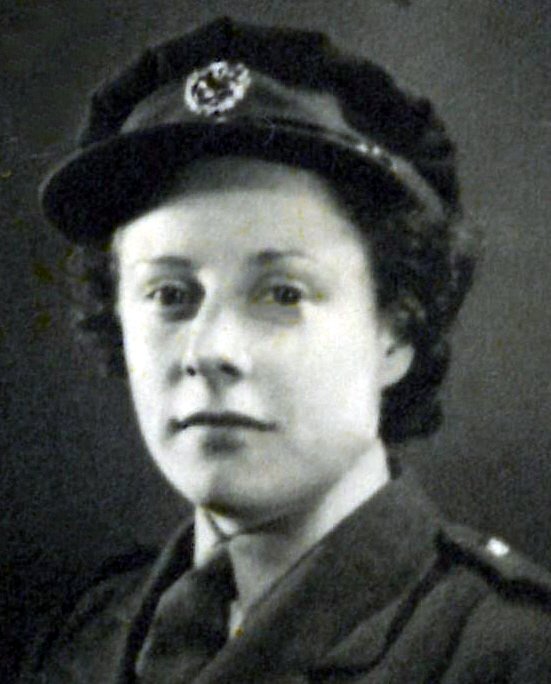 It is with heavy hearts that the family of Mary Noddin, loving wife of the late Ralph Noddin, announce her passing on August 30, 2019 at Rocmaura Nursing Home. Born in Saxmundham, England in 1923, she was a daughter of the late George and Nona Cooper.

At the age of 18, Mary joined the Auxiliary Territorial Service in Britain for the duration of WWII, attaining the position of Corporal. She met the love of her life in England during the war and eventually married Ralph in April, 1945. In August of 1946, Mary and her daughter, April, came to Canada aboard the Cunard liner Aquatania. After living in Saint John for two years, they moved to Toronto. It was here that Mary worked in customer relations at a dry cleaning establishment. She excelled at dealing with people so this was a perfect fit. Mary and Ralph were able to save up enough money to allow them to buy a place of their own, eventually buying an acreage with a house and settling in Ethel , Ontario.

Mary was a devoted employee of the Campbell Soup Company in Listowel, Ontario for many years and eventually attained the position of Forelady. Mary loved to tend to her huge vegetable garden, enjoyed sewing, knitting and of course, milking the cows. She was a fearless woman who was known to be able to do just about anything! She and Ralph worked hard, and it was their “team effort” that helped them to provide for their family. Following retirement from Campbell’s, she and Ralph enjoyed travelling extensively before returning to Saint John. Above all, she was a devoted wife and mother and will be dearly missed.

Mary will be lovingly remembered by her daughter, April Dietrich (Larry) of On; grandchildren, Peter, Lilli (Chris) and Anna (David); great-grandchildren, Angelica, Andrew, Alison and Dakota; brother-in-law, Philip of England; as well as many nieces and nephews from England and Canada.

In addition to her parents and husband, Ralph, Mary was predeceased by her son, Colin; her sister, Janet of England; sister-in-law, Ada Porter (the late Don); brother-in-law, Stan Noddin (the late Philla) and brothers-in-law, Theodore and Donald Noddin.

Arrangements are under the care and direction of Brenan’s Funeral Home, 111 Paradise Row, Saint John (634-7424). At Mary’s request there will be no visitation or funeral service. For those who wish, remembrances in Mary’s memory, can be made to Rocmaura Foundation Inc. WWW.BrenansFH.com.

Share Your Memory of
Mary
Upload Your Memory View All Memories
Be the first to upload a memory!