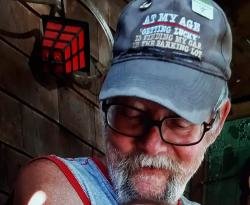 It is with great sadness that the family of Arthur Karl Hilden of Saint John announce his passing which occurred Saturday May 5th/2018 at the Saint John Regional Hospital. Born on March 20th, 1955 in Saint John, he was the son of the late Harold J. Hilden and the late Frances L. Hilden (Saunders) and the late Evelyn R. Hilden (Dunphy). Arthur was a graduate of Saint John Vocational School, where he began his love of cooking. He then went on to take other work related courses in the Military where he as a Master Corporal ran the kitchens until his medical retirement in 1990. Most of his treasured time was spent with family and doing the things he loved. Helping his best friend Peter Wong over at Bob's Corner Take-Out, going to Bingo, watching or attending wrestling matches. And sitting on his porch talking to friends and neighbors especially Frank Short. Arthur is survived by his children, daughter Kelda Brigden (Bruce) of Saint John and son Karl Hilden of Moncton. His brother Harold (Bill) Hilden (Nancy) of Nova Scotia, sisters Lindy-Lou Roy of Saint John, Frances Cunningham of Toronto, Ruby Day of Alberta and Robin Oldfield (Randy) of Saint John. Arthur's greatest treasures were his grandbabies whom he loved dearly, Vincent, Riley, Landen, Autumn, Tye, Daunte, Dominic, Abigail and Kai and numerous nieces and nephews. Besides his parents he was also predeceased by his brother Vincent MacLennan and brothers-in-law Lawrence Roy, Jack Cunningham and Brian Day. Arthur's family would like to express their heartfelt thanks and appreciation to the staff at IV Day (Day Care) at St. Joseph's Hospital. Paula, Tasha, Marlene, Annette, Ruth, Amelia and Diane for their excellent care and friendship. Dr.Williams from Palliative Care for her compassion and care and all the nursing and respiratory staff who made him feel at ease. Arrangements are under the care and direction of Brenan's Funeral Home, 111 Paradise Row, Saint John, NB (506)634-7424. As of Arthur's wishes there will be no visitation or service. Private cremation has taken place and family and friends will have a celebration of life at a later date. For those who wish, remembrance may be made to the Palliative Care-Saint John Regional Hospital Foundation or St. Joseph's Hospital Foundation for IV Day. www.brenansfh.com

Share Your Memory of
Arthur
Upload Your Memory View All Memories
Be the first to upload a memory!